Creator.co has demonstrated a keen understanding of the market they’re trying to serve, pretty much since the company incorporated in 2016. Back then, and when they launched their platform in 2018, it was called Shop and Shout; it launched as an Influencer Marketplace, at a time when influencer marketplaces were overloading the industry. But Shop and Shout was unique, focusing on small businesses and micro influencers—but giving them the kind of insights and business intelligence usually reserved for much bigger brands.

Flip the calendar ahead to today, and the company’s very recent rebrand to Creator.co seems like it might be an attempt to jump onto the latest trend—everyone’s talking about the creator economy, after all. Having seen what’s behind the success of the platform, though, the rebranding feels more like an attempt to reclaim what’s rightfully theirs. Regardless of what it’s called, the platform’s focus is as much on the creation of content as it is on the dissemination of that content. And because the creators themselves generally fall into the microinfluencer category, the quality of their content is more important to the platform (and its users) than it would be with others. Marketplaces tend to be more about marketing quickly on a large scale. Creator.co can do that, but if that were all then it wouldn’t be unique.

If you’re just concerned with reach, you could use the Discovery tool to search through their database of 500 million influencers to find those that might fit with your brand. And, as you’ll see in The Details section of this review, you’ll get a metric tonne of data on these influencers and their audiences, more so than you’d expect from a platform that’s designed and priced to appeal to small and medium businesses.

Creator.co also offers a kind of “hands free” version of the marketplace experience that is both more efficient and, counterintuitively, more focused on quality than reach. Brands need only create and define their campaign and ideal influencer, and the system plays matchmaker that chooses from a much smaller, but thoroughly vetted, talent pool of around 80,000. In between creating the campaign and monitoring its performance when it’s live, the only thing a brand needs to do is choose whether or not to activate the influencers who want to participate.

For the kinds of customers Creator.co wants to attract, this approach is ideal. Small companies don’t necessarily have marketing departments, so much as they have marketing obligations, and whoever is free to handle them gets the honors. To run campaigns on autopilot like this amounts to more than just a time saver. But a funny thing happened on the way to creating a product for the SME sector: large companies like Walmart and Colgate jumped onboard, too. Clearly, Creator created something good.

Creator.co
This is not your average marketplace: next-level data and analytics, assistance from campaign specialists, automated campaigns, and streamlined Giveaway tools are just a few of the big-business features that Creator.co brings to small business marketing efforts.
Pros and Cons
More data and deeper analytics than many platforms that cost exponentially more
Automated campaign mode that relies on a mix of Creator.co’s staff and algorithms
Facebook Ads integration to quickly repurpose content
Campaign reporting limited to basic metrics
Best for: Small and Medium businesses
Ratings
Features
4.0
Ease of Use
4.5
Reporting
5.0
Overall Score
4.5

Creator.co’s pricing is an exercise in simplicity. There are two plans to choose from, and unlike competitors, these plans don’t gradually increase the number of features (or relax restrictions) as you pay more money. Instead, you can just choose between the two different methods of campaign management described above. Or, more accurately, you can have one or both of the self-serve and automation options. There are more pricing options (for billing monthly, quarterly, biannually, and annually) than there are variations in features, a nice change of pace.

Creator.co’s workflow starts with campaigns. Whether you’re working with the self-service option or the automated one, the first thing to do is create and define the campaign. This part is very important to get right—you’ll want to be as specific and detailed as possible. If you’re going self-serve, you won’t want to spend much time answering a lot of questions; your plate will be full of negotiations and activations. And if you’re going automated—well, successful automation requires you to cover every detail up front, so everything runs smoothly. 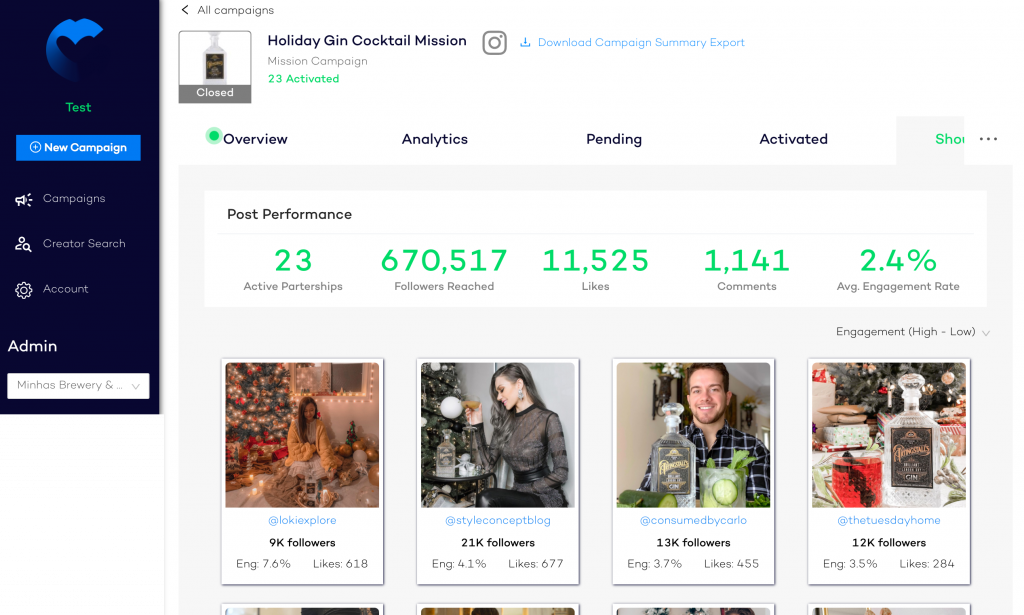 Campaigns can be fully customized, but there are also two pre-fabricated types. There’s a ShoutOut campaign, which is essentially an exchange of free products for exposure. You can also add cash payments to sweeten the deal, if necessary. And then there are Giveaways, where you work with influencers to drive followers to your profile by running contests for free stuff. Once your campaign has been created, finding influencers is your next step. For self-service, the search runs very much like any other influencer marketplace, so there’s no need to go in-depth about it here. Instead, we’ll focus on the process for the Community Driven campaign. Here’s what you do next:

Not much! Relax. Read a book. Visit a dairy farm and see how milk is produced, handled, and distributed. Everything’s happening behind the scenes with a mix of algorithmic and human intervention. As influencers opt-in to your campaign, they’ll show up in your dashboard for your review. Clicking through to any influencer profile gives you a nice overview of what they’re about: their bio areas of expertise, stats, basic audience demographics. There’s also information on any other paid work they’ve done on the platform, so you can see who they’ve worked with, as well as a rating by each company they’ve worked with.

You get the idea.

Actually, you don’t, because there’s even more. You’ll find out which of their followers are notable for their own level of influence. Ditto for the people who’ve engaged with their content. There’s also a list of other influencers with similar audiences. These Insight reports are exported as PDFs in excess of 15 pages. It’s an incredible amount of data and analysis, made even more notable by the fact that it’s on a platform built for small and medium-sized businesses.

In any case, when it comes time to click on the “Activate” or “Decline” buttons, you will be plenty equipped to make an informed decision as to which one. You will have an easy time of watching everything happen as it goes live, as well. The campaign dashboards are very cleanly laid out, easy to navigate between pending opt-ins, campaign performance metrics, and the collection of content that’s already been posted. The campaign reporting is surprisingly limited, though. More narrowly focused than what you get during research and discovery, you'll get  some basic performance metrics (reach, impressions, and engagement), your Earned Media Value, and basic audience demographics (age, gender, and location). There are no psychographic insights into the audience that’s viewing and engaging with the content, which would be a nice thing: every post made on your behalf for a campaign is an asset you own and can repurpose. Knowing more about who in the audience liked your content would make it easier to target similar audiences. Creator.co’s built-in Amplification feature moves an asset directly into Facebook Ads Manager—which is great!—but you won’t be able to take full advantage of the audience targeting they offer. This is a relatively small quibble, given how much else the platform is capable of, but it’s worth mentioning. 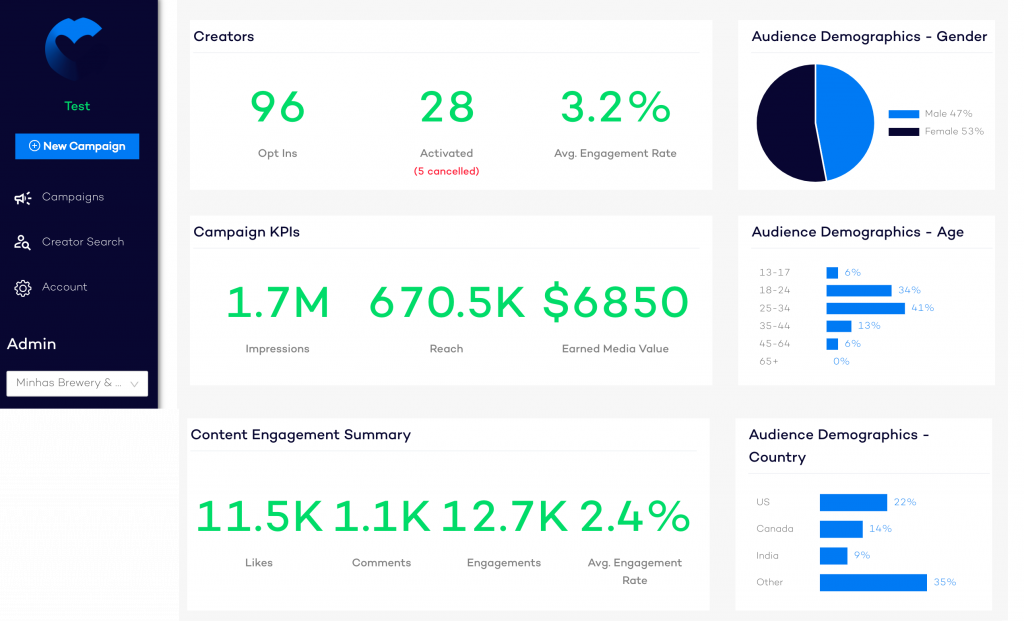 It is the first platform to all three of those things simultaneously, and they’ve done quite well at it. There’s a reason why a software tool built for smaller businesses on a budget is used by a multibillion dollar company like Walmart, and it isn’t the affordable pricing. Its one downside is the limited campaign reporting, but that same reporting still tells you enough to know that what you’re doing on the platform is effective. And with the Community Driven plan, it’s effective while also not asking a lot of its users. You can’t really ask for anything more.