Like Instagram, Later, focuses on the visual. Indeed, unlike all the rest that start with a social message and then allow you to add an image, Later requires you to start a post by uploading an image. You then add suitable text to the image.

I initially found it hard to set up Later to allow automatic Instagram scheduling (having now used other social media managers with similar Instagram issues I have concluded that Instagram deliberately makes this challenging).

Eventually, once I had performed every step required to set up Later for Instagram publishing, it was much easier to use. It even has a Stories button you can use to schedule content for your Instagram Stories.

At least Later lets you store your graphic images in a Media Library. This allows to show quite some detail about each image you’ve used, add media notes, and even distinguish your used media from you unused media.

As a SaaS platform, access to Later is sold on a monthly basis. Later offers five paid plans, as well as a free plan. All paid plans can be paid on a monthly or yearly basis. They offer a 17% discount for annual payment on the paid plans.

Later is a classic example of how one person’s Heaven can be another’s Hell. I can imagine that many Generation Z or Millennials will love Later’s graphical focus, particularly as it places its primary emphasis on influencer darling, Instagram. As a writer, I found having to begin each new post with an image annoying. I typically start a social post with text and then find the best image to match it. Later requires that you follow the reverse work pattern.

However, I recognize that everybody is different and so I’m reviewing Later open-minded, despite my personal misgivings behind its basic work approach.

Later makes its intentions very clear when you first arrive on the platform, with the big, bold strapline, “Later - #1 Marketing Platform for Instagram”.

As with most of these social media managers, the first task you should do is to attach your social accounts. Naturally, it makes sense to begin with Instagram. 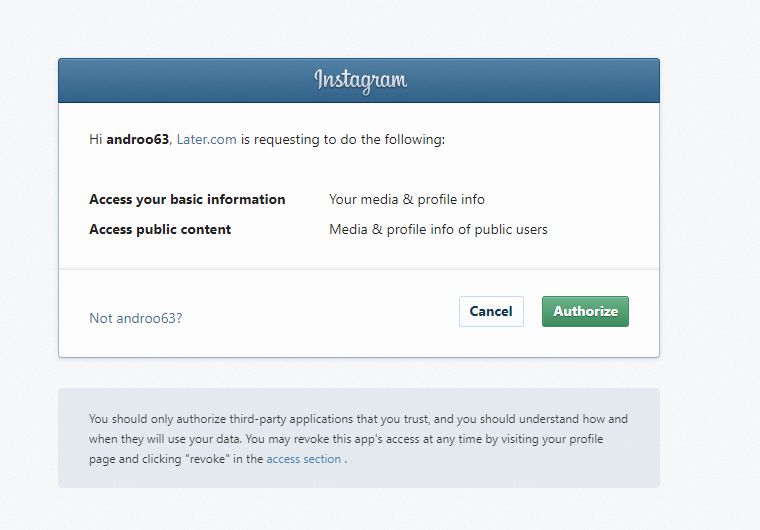 However, this was where I struck my first problem. To seamlessly use Instagram with Later you need to download and use Later’s mobile app. 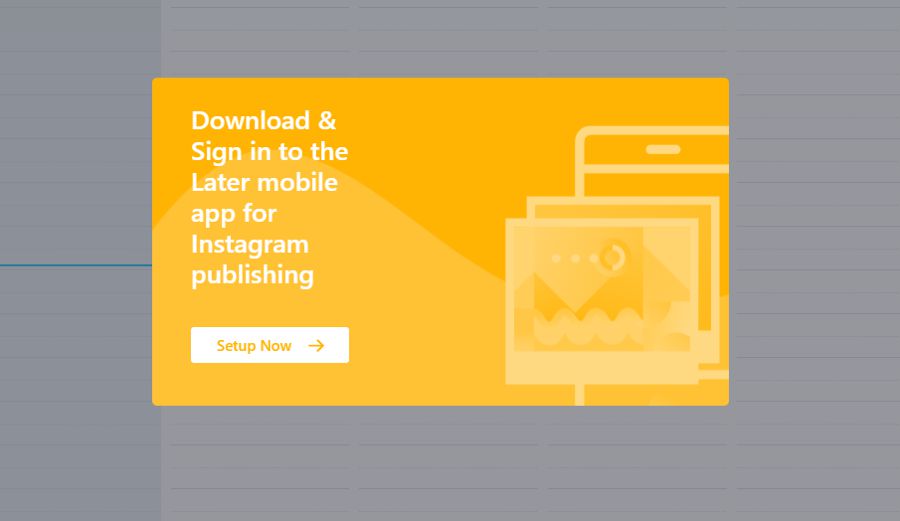 Another surprise I discovered at the beginning was that I couldn’t automatically schedule posts to Instagram in the same way I could to Facebook or Twitter. The best I could do was to set things so I would receive a message on Later’s mobile app at the correct time reminding me to make the intended post manually.

I later learned that this is a limitation of Instagram itself, rather than Later. There is a workaround though. You must ensure that your Instagram account is set up as a Business Profile and you have to attach it to a specified Facebook page.

Once I had done that, my Instagram scheduling was fine. I must admit that at the time I tested this I thought it was extraordinarily convoluted and challenging. Having tried a few other products since I must confess that Later has streamlined this to be better than much of the competition.

In comparison, Facebook and Twitter were straightforward to set up, although they are clearly more of an afterthought on Later, compared with Instagram. I didn’t try Pinterest, but I imagine it will work fine, as that social network hasn’t introduced any rules affecting their API and being graphically-based it seems ideal for Later’s central concept.

The heart of Later is its Media Library. You begin every post you make by either uploading new media to the library or reusing media you’ve already uploaded.

You can add notes and labels to your media items and add a Star to any image you wish to highlight. It also keeps a record of any time you have used a media item in the past. You can filter your images by Label or Star, by media usage, type of media, and by the time frame in which you uploaded your media.

The heart of any social media scheduling app is, of course, scheduling your posts. Once you have got over any problems you may have with an Instagram account that doesn’t fit the rules (e.g., using a Personal Profile) you can begin to schedule your posts. The free plan limits you to scheduling static images, but the higher plans add in videos, Stories, and multi-photo posts. You can also tag locations and users if you have a paid plan and receive hashtag suggestions on the business plans. While the different plans have limits on the number of posts you can share on each network, you can store unlimited media, even on the free plan. This means that you can effectively build up evergreen content, particularly if you like to share items like infographics. 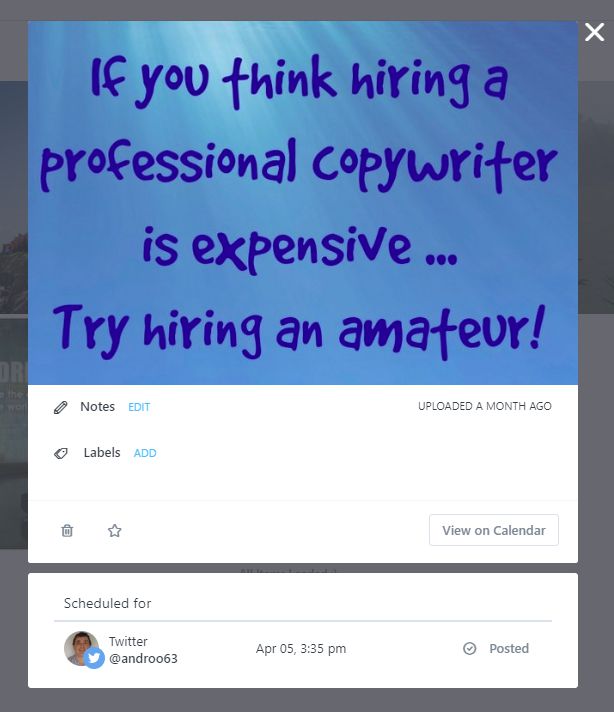 You begin each post by selecting an item from your Media Library (uploading a new image/video/GIF if you wish). You then fill in your caption, adding any links and hashtags. Later suggest hashtags if you need inspiration. 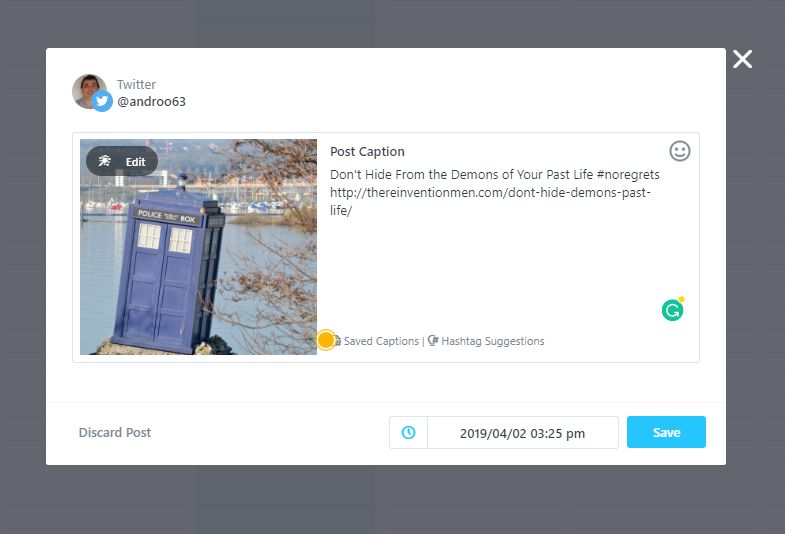 Later also offers Quick Schedule, where you can simply drag and drop posts onto time slots in your schedule. This is effectively Later’s equivalent to a queue, as used by some of the opposition apps. You create a weekly time slot to publish content, and then you can simply drag and drop media onto your calendar. Later populates your next available time slot with your media content. Note that for auto-publish to work with Instagram you must restrict your posts to having a single image or video (another Instagram API requirement).

One of Later’s Instagram-only features is Search & Repost. This allows you to search Instagram posts by #hashtags to find suitable content for reposting. If you find a post you like, you can add it to your media library and schedule to repost it at an appropriate time in the future. It is a pity that Later doesn’t offer the same features for Twitter and Facebook, as unlike much of the competition it doesn’t offer other ways to find content to share on those platforms.

Other interesting features restricted to holders of a business plan are Conversations and Contributors. Conversations allow you to manage your Instagram comments directly inside Later. With Collect, you can collect submissions from your top content creators and invite anybody to upload media, even if they don’t have a Later account.

The Later business plans also give access to Linkin.bio which is excellent if you want to engage n eCommerce directly from your Instagram account. You can use it to build a clickable shoppable Instagram feed so you can direct your followers to the right content and product pages. You can connect your Shopify store to Later and start tagging your Shopify products to your Linkin.bio page.

If your sole purpose is to find an easy way to post to Instagram (and perhaps some cross-posting to other social accounts) then Later could be ideal for you. It lacks most of the heavy-duty features offered by some of the other apps, such as social listening, and in-depth reporting, but then it isn’t priced at that level, either. The top plan (at $49/month) is less than the lowest plan for some of the more corporate-focused opposition programs.

Just, make sure that you follow the rules for setting up your Instagram account carefully. You need to have a business profile linked to a Facebook page to use Later to its full capability.

What can I do with Later?

Can I use Later for free?

Yes, Later has a free plan as one of its five pricing plans. With the free plan, you will have 1 social set, 1 user, 30 posts per social profile and basic Instagram analytics. The number of photos you can upload to the Media Library is unlimited, but you will be able to schedule only static images. The free plan also does not offer stats relating to Pintrest posts, analytics about Instagram hashtags or the Conversation and Contributor feature.

How much does the Later app cost?

Later has different pricing plans: one free plan and three paid plans. Since writing this article, the paid plans have changed. Currently, their paid plans are: Starter (from $12.5 per month), Growth (from $20.5 per month), and Advanced (from $33 per month). Depending on how many additional social sets and extra users you require, the pricing will change. If you opt to make an annual payment, you can get a 17% discount.

What are some of the cons of using Later?

Some users will find its graphical focus annoying. You have to start each new post with an image before you can add text. Similarly to most other social media management platforms, it is quite hard to schedule posts to Instagram. Though, it should be noted that this is because of a limitation of Instagram and not really the app itself. It does not offer heavy-duty features like social listening and detailed reporting, but considering what it costs it is still good value for money.

Later is the social media management app for people who think visually (and don’t have complex corporate needs). It requires you to focus on your visual media first, adding text, links, and hashtags later. Excellent for Instagrammers, less so for those who prefer to focus on other social platforms.